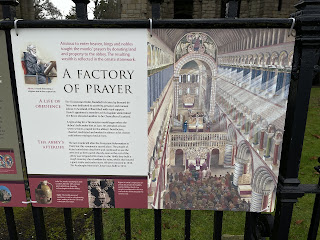 The Tourists had a rare morning off and some took the opportunity to explore the beautiful town of Kelso.   Just a block away from the Ednam House Hotel was a small farmers market in the town square and a block the other way was Kelso Abbey. Kelso Abbey was founded in the 12th century by Tironensien Abbey where the Tweed River and Teviot Waters converge.  The Abbey was destroyed in 1540s under the order of King Henry VIII. That is Floors Castle in the distance.  It was built in the 1720s for Duke John. At 11:00 am, the Tourists boarded the coach for the 2 hour trip to Edinburgh which allowed us to get our last view of the bonnie Scottish countryside and our first views of Edinburgh proper. At about 12:30 pm the Tourists arrived at Curl Edinburgh at Murrayfield, located next to Murrayfield Stadium, home of Scottish Rugby.  The Tourists were met with a Guard of Honor ceremony that included Olympic Silver Medalist Bruce Mouat. Upon arrival, the Tourists were treated to a tasty lunch of so
Post a Comment
Read more
More posts
Powered by